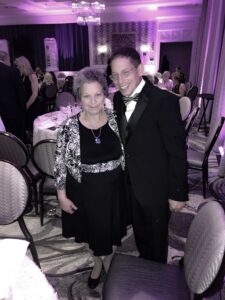 I have had a movement disorder issue since mid-2004.   It was ultimately diagnosed as Parkinson’s Disease.   Parkinson’s Disease is diagnosed by observation of symptoms and their reaction to dopamine.  While most often thought of as tremors or jerky movement, in general it is a slowing of the body due to lack of dopamine and various medicines and other procedures are implemented to increase dopamine.   In my opinion education and logical thinking are the key to surviving this road block in our life.   Education includes understanding your own situation, making sure all of your medical professionals understand your situation, seeing a Movement Disorder Specialist as opposed to a general neurologist and learning about what research is being done and participating in clinical trials and join a support group to know you aren’t alone.[more..]

Here is my history with Parkinson’s.   My journey with Parkinson’s started the year my son graduated high school, 2004. And therefore, it’s been Ron’s and my journey since the kids were largely out of the house and have not seen the daily battles with this disease.

Very briefly, In 2004 I started with knee pain, Ron also notice my right arm not swinging.  By the end of the summer the pain stopped but my walking became more and more difficult.  In August 2005 I was told Parkinson’s or MS but then a MRI showed spinal stenosis and I had a laminectomy C4-C7 (no fusion).  Recovered partially, diagnosed Parkinson’s January 2007.   The key to living with Parkinson’s is education and understanding your body but I will cover that more later.  I participate in several support groups.  My movement disorder specialist keeps telling me that “I look great” and take relatively low amounts of medication but without that medication I don’t walk or move AND I don’t think well because Parkinson’s is a slowing of the whole body.  Very briefly the three main medicines are Sinemet which is artificial dopamine, Requip which helps the  body make more of its own dopamine and Azilect which helps the body  use what dopamine that is there more efficiently.

Thanks to a recommendation by my friends Kathy and Kevin Murphy, I’ve been using hiking sticks for I don’t remember how long as a walking aid when I get tired.  This works better than a cane because it reminds me to stand straighter (and my physical therapist agrees with this).   So I was prettys stable for many years until we took a trip to Europe and walked about 35 miles in 12 days (most in the first three).  After this I started with severe back pain. I had a discectomy L2-3 July 2016 but problems at L3-4 and possibly sciatic region were not addressed and the pain persists.  With every pain, you must evaluate if it is from parkinson’s or not.  In otherwords does the pain reduce when the medicines are at their peak time.

So for the past two years I’ve been fighting the pain including exercise, massage, physical therapy (she specializes in neurological cases).  I’ve tried accupuncture and CPD oil (no THC) with mixed results along with steroid injections which didn’t do much.   I use a high end chiropractor who helps me review my situation and where to turn to next for help.   I recently started Rock Steady Boxing and Pound it Out which are both exercise classes for people with Parkinson’s.  These have increased my self confidence a bit and the boxing class (at least the one in NY) has me lifting my legs more, etc.  The Pound It Out class (drumming on pilates balls) helps my upper body strength.  The second key to Parkinson’s is to KEEP MOVING or in other words USE IT OR LOSE IT.

As I prepare this page  in 2018, I am 60 years old, married for 38 years.  Both my children are married and my daughter has two daughters,.  I hope my entries are helpful to you if you are fighting Parkinson’s Disease or Caring for someone with this disease.